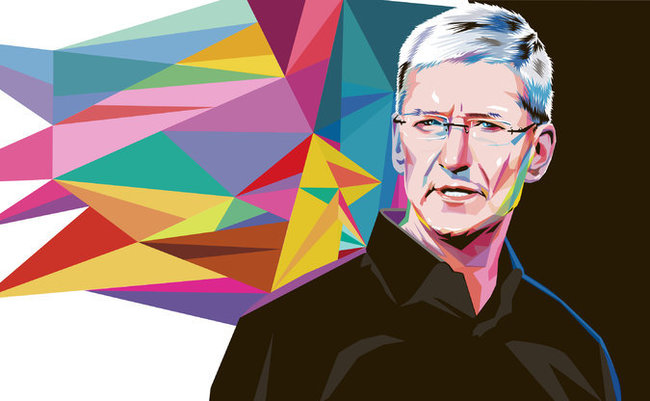 This is a beautiful piece released by the New York Times over the weekend, I highly recommend reading it. There’s some great observations in it about how Tim Cook is shaping Apple to be different from how it historically was under Steve Jobs.

Cook is redefining the way the company operates by being approachable, compassionate and quiet/considering of all choices. It’s a shock for many outsiders who seem truly stuck on the idea that Apple can’t survive without Jobs.

The biggest thing I took away from this fantastic piece is that Apple has changed significantly and positively in many ways – you may conclude this yourself if you watch the WWDC keynote in its entirety – but perhaps most exciting is how much of a positive impact Cook wants to make on the world at large.

In response to a question earlier this year asking if Apple should avoid embracing environmental causes (such as...

I’ve been using Twitter for a number of years now – since late 2008 – so I’m well entrenched in using the network as part of my daily life. I love Twitter. It’s a great way to meet people, discuss common interests and things as they happen. It’s the new water-cooler, and it’s a great place to hang out.

Over the years, I’ve forged some great friendships via Twitter and met people I would have no hope of just meeting on the street as a result. It’s a great tool for networking and I love being a part of it.

But lately there’s been a series of stories about why Twitter is in trouble. Its user growth is flatlining. Executives are leaving the company. People aren’t joining Twitter as quickly as they were supposed to.

This perplexed me. Why is it that I can get so much value from the network, but new users can’t see that value? Why can’t I convince friends that it’s so good?

A few weeks ago, I took a look at the messaging services I had on my phone; WhatsApp, Line, Snapchat, Skype, Hangouts, Facebook Messenger and iMessage. Six apps that all serve basically the same purpose in a different way; communicating with friends.

I remember two years ago being excited for the convergence of messaging apps; when I could use Windows Live Messenger/AIM/Skype/Google talk in [one app](http://trillian.im! I remember thinking that it was exciting to have less apps, not more, to message my friends.

After all, it’s a hassle to maintain friends lists in all these different places… and you eventually have those conversations along the lines of “is it better to Snapchat you or send you a Twitter DM?”

In any career, there’s a constant need to be improving yourself. Working at your craft, refining your skills, getting better and having deeper understanding of what you do. The hunger to be better – to succeed – is vital to driving us to success.

You’ve probably read a lot about things successful people do daily to get where they are. Everything from rising early to setting lots of goals; while those particular tips may or may not be true, the key that many fail to grasp is that it’s not the method that these people used to become successful that matters.

What matters is that they set out to be better than everyone else.

That hunger to be a better at what you do is something that many fail to listen to and quickly become comfortable. What you need to realize is that there are thousands of other people that do the exact same thing as you in your city and are competing with you to be... 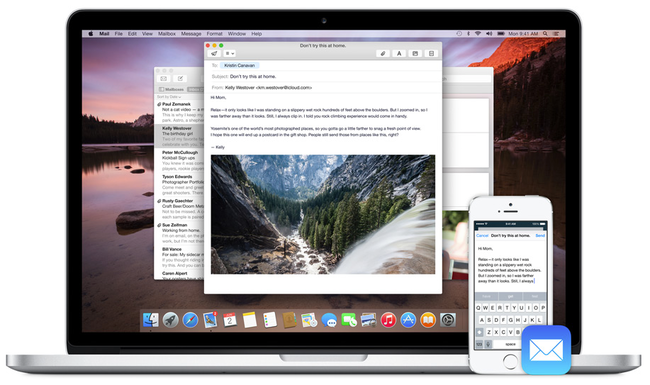 Apple’s WWDC this year was monumental, but not because the company redesigned OS X or released a shiny new version of iOS. It was a game-changing unveil because Apple has finally acknowledged that the centre of computing now revolves around the phone.

A new technology called Continuity provides a seamless experience when moving from the Mac to the phone/tablet. A few examples of how Continuity works are important to illustrate how powerful this is:

I’m starting a tech newsletter, designed to save you time

I used to blog about tech here a lot, but I’ve been thinking for a long time that I would like to do something more personal instead.

I spend almost all of my spare time reading articles online and looking into how they came about, but haven’t been passing any of that knowledge on outside of my Twitter feed.

I’ve decided to start a simple newsletter called Charged which will be a weekly ‘too long, didn’t read’ roundup and analysis of interesting happenings/trends in the tech industry. I know you’re busy, so I want to help.

The type of stories will vary wildly, but it’ll always be entertaining, easy to understand, concise and worth your time. I promise. If you’ve liked what I share on Twitter, then you’ll love this newsletter. I’m not interested in click-bait.

This is something new for me (and I’m terrified!), but I’m hungry to be better informed about what’s happening in tech as...

Nike kills off wearables instead of going to war with Apple 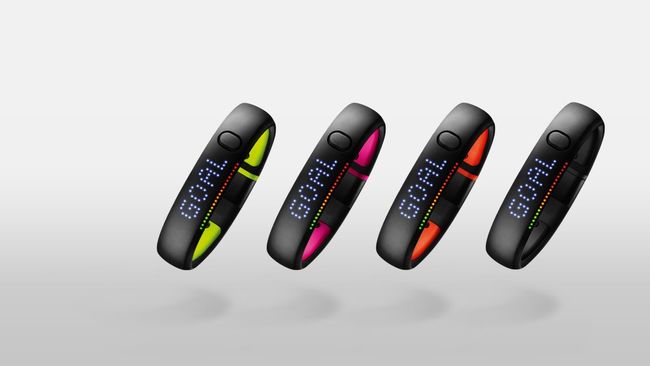 The news leaked today that Nike had laid off the entire FuelBand team, as the company looks to exit the wearables market. This is a strange move, especially considering the company has just released the FuelBand SE.

But it’s not that strange at all. It’s been rumored for longer than I can remember that Apple is getting into the ‘wearables’ market with a watch-like device, dubbed the ‘iWatch.’

This device is expected to be unveiled this September, alongside this year’s iPhone as Apple seeks to expand into ‘new product categories.’ Today’s Nike move, to kill off the wearables part of the company and focus on software, is surely part of that strategy. 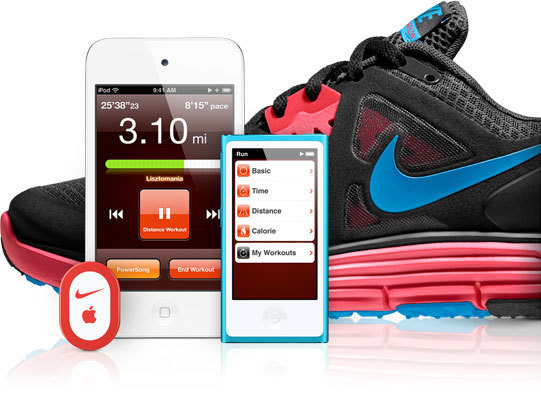 Nike and Apple have long been close allies, with Nike building a partnership to bring exclusive integration between the iPod/iPhone for years with its Nike+ sensor for shoes.

It only makes sense that Apple would at least partially... 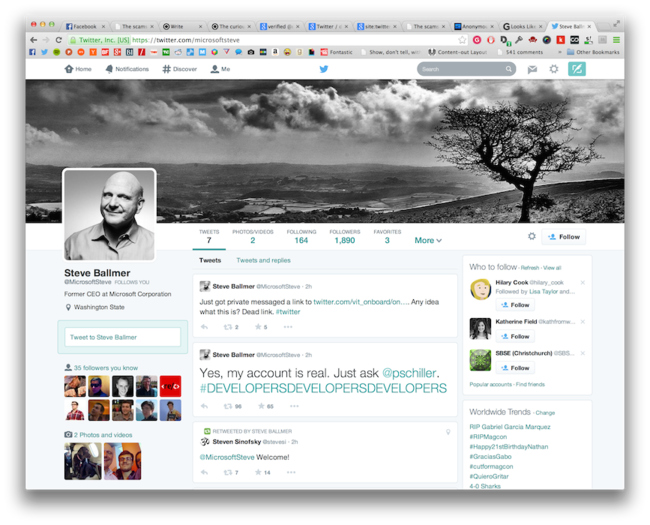 On Twitter today, a fake Steve Ballmer quickly gained a lot of followers as people discovered the account. The account tweeted a few times, with a bunch of convincing pictures that hadn’t been posted anywhere else online, so many were lead to believe it was real.

Thanks for having me @Twitter! Guess I’m supposed to start with a selfie, right? pic.twitter.com/Ivcas8gn2T

The account quickly gained steam, with Anil Dash, Steve Sinofsky and others (including myself) tweeting the account, falling for the trick. Something seemed fishy about the account but I couldn’t put my finger on it.

I was almost convinced that the account was real (even Gizmodo wrote something about “Ballmer’s” first tweets from his iPhone!) then it tweeted this:

Just got private messaged a link to https://t.co/8R8Ohu5Oet. Any idea what this is? Dead link...

There’s a PayPal scam going around on Twitter at the moment that claims to be offering money to those that retweet a tweet:

First 10k people to retweet get 1k each, fuck my dad and his manufacturing company. pic.twitter.com/LBA0AL52aJ 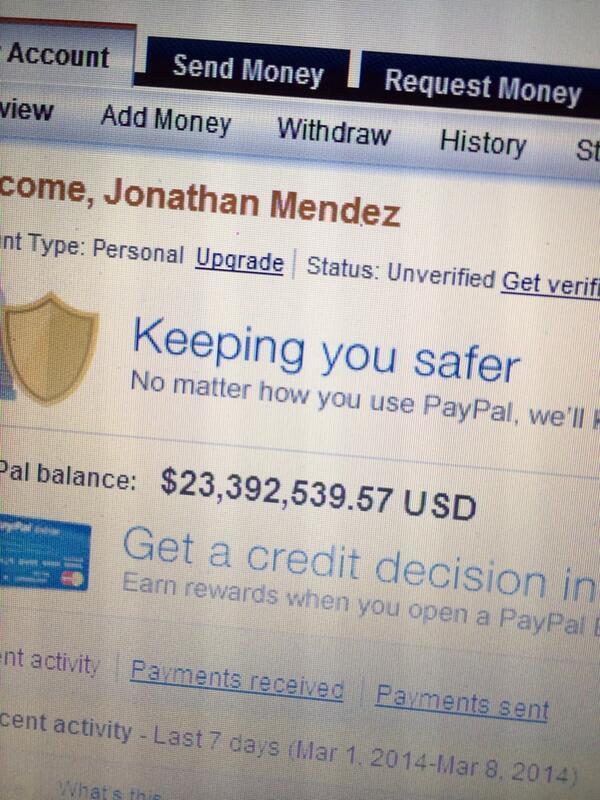 It’s a complete and utter joke, yet there are hundreds of replies with people saying “thanks for the money” and “wow, I can pay off my mortgage now!” Lots of people I follow are believing it too.

There’s no way this is legitimate - PayPal would shut this off almost immediately. I’ve been suspended for moving $100 around, so I doubt this person could shift $100K out of their “dad’s” account for fun. My current suspicion is that this is an elaborate scam that involves a number of this person’s friends - or a bunch of bots.

Despite what you might believe, this whole thing is a scam. Perhaps an elaborately pulled off...

I’ve got some sad, but happy news to share: I’m saying goodbye to Xero for a new adventure.

A few months back, I was approached by some friends about an exciting new service they were building and they mentioned that if I wanted to be a part of it, I could be. I politely declined as I was happy where I am, but it stuck in my mind for some time afterward.

I spent weeks regretting it. I thought about what I could be missing out on by not seriously considering joining the team almost daily. After reading about Jeff Bezos’ Regret Minimization Framework one morning, I came to the conclusion that I would always kick myself about missing out on an opportunity to take a risk with the team later in life, so I sent an email to Owen Evans and told him I wanted to join.

Which leads us to now. In April, I’m joining a NZ based start-up called Hoist as Manager of Marketing and Communications /...