I’ve been using Twitter for a number of years now – since late 2008 – so I’m well entrenched in using the network as part of my daily life. I love Twitter. It’s a great way to meet people, discuss common interests and things as they happen. It’s the new water-cooler, and it’s a great place to hang out.

Over the years, I’ve forged some great friendships via Twitter and met people I would have no hope of just meeting on the street as a result. It’s a great tool for networking and I love being a part of it.

But lately there’s been a series of stories about why Twitter is in trouble. Its user growth is flatlining. Executives are leaving the company. People aren’t joining Twitter as quickly as they were supposed to.

This perplexed me. Why is it that I can get so much value from the network, but new users can’t see that value? Why can’t I convince friends that it’s so good?

I decided to sign up for a new account to see what the on boarding experience is like for new users. It’s the most important part of joining the network for new users, so I wanted to see how they’re encouraged to use it.

The first thing you encounter as a new user is this screen with recommended Twitter usernames:

I’m aware that it’s hard to get a nice Twitter username, but this is the best it could recommend? Not a good start. After this, there’s a nice interstitial asking if you want to follow the World Cup. Twitter is pushing this hard. 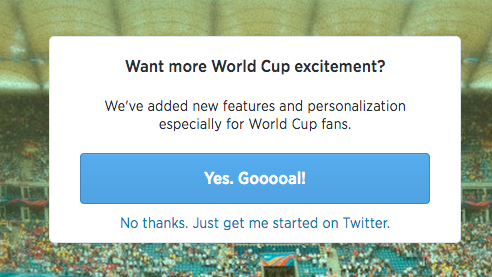 After skipping that, you’re introduced to the feed for the first time, by a lovely gentleman called “The Twitter Teacher.” I found it kind of funny, but it’s a nice human touch.

On the left of that, you get some recommendations for the first people to follow. I like the idea of this, but why does it only recommend famous people and company accounts? Scrolling down, it recommends accounts like BBC, Stuff.co.nz and other business accounts. 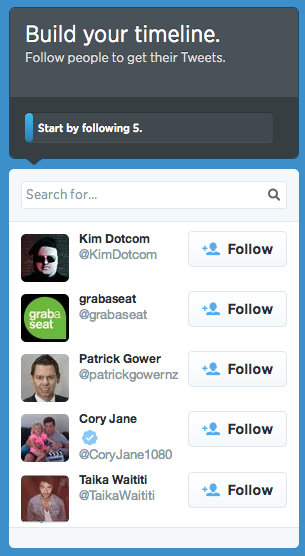 This is disappointing, as most of Twitter’s value is not tied up in following celebrities. I suspect that many users sign up for the first time, follow mostly celebrities and then give up, since they never get much interaction. I’ve seen this amongst friends who tried to join, because they didn’t know who to follow and didn’t get any conversation.

It feels like a missed opportunity to showcase other users that are active and having conversations with their followers, rather than famous people. The value in Twitter is not observing and it’s clear that this feature misses the point.

By the way, you can’t skip this screen. I mean, you can if you know to sign out and sign back in or think to navigate to Twitter.com, but what new user is going to know that? Unless you know people on Twitter already and know to search for them, otherwise you’ll just end up following some famous people. 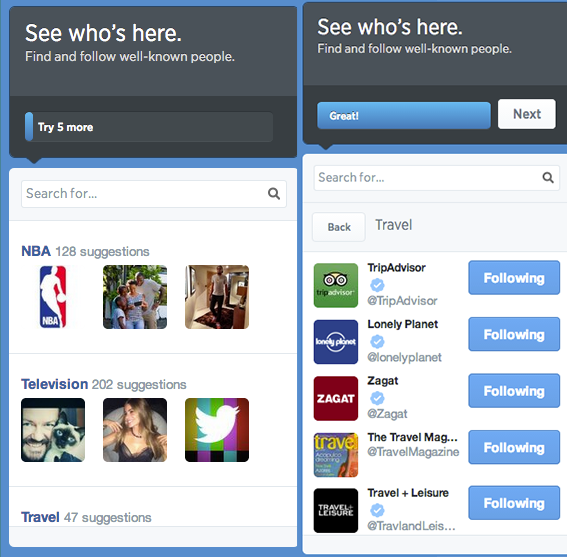 The next step is to find some friends! Finally! Some people I might know! Alas, I can only search from my email account contacts, not something I actually use, like Facebook or even Google Plus (I also enjoyed the well hidden skip button).

The final step is to give yourself an identity. For some reason, this is skippable when it really shouldn’t be. Once you’ve filled it out, that’s it! You’re on Twitter! Look at my awesome new feed, ready for interaction: 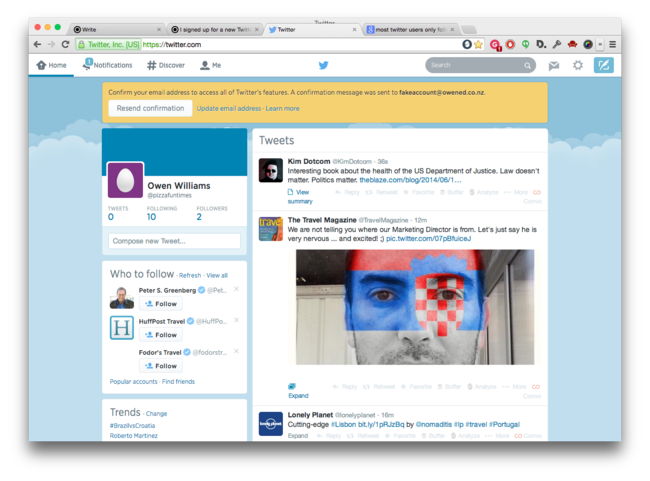 The mobile experience is even worse. You sign up for an account, then you are thrown into the app with no on boarding at all. Seriously, these are the two steps new users see (as far as I can tell): 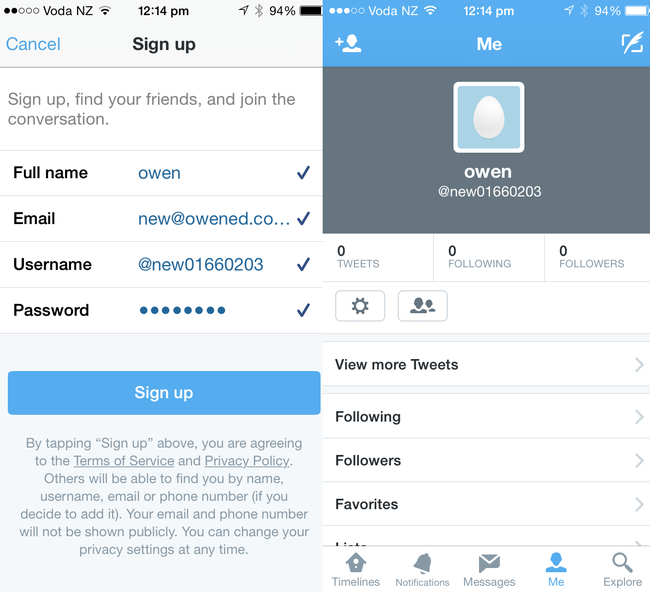 There’s an interesting ‘explore’ tab I’ve never seen for new users that shows a few interesting stories and people from Twitter, but that’s all. 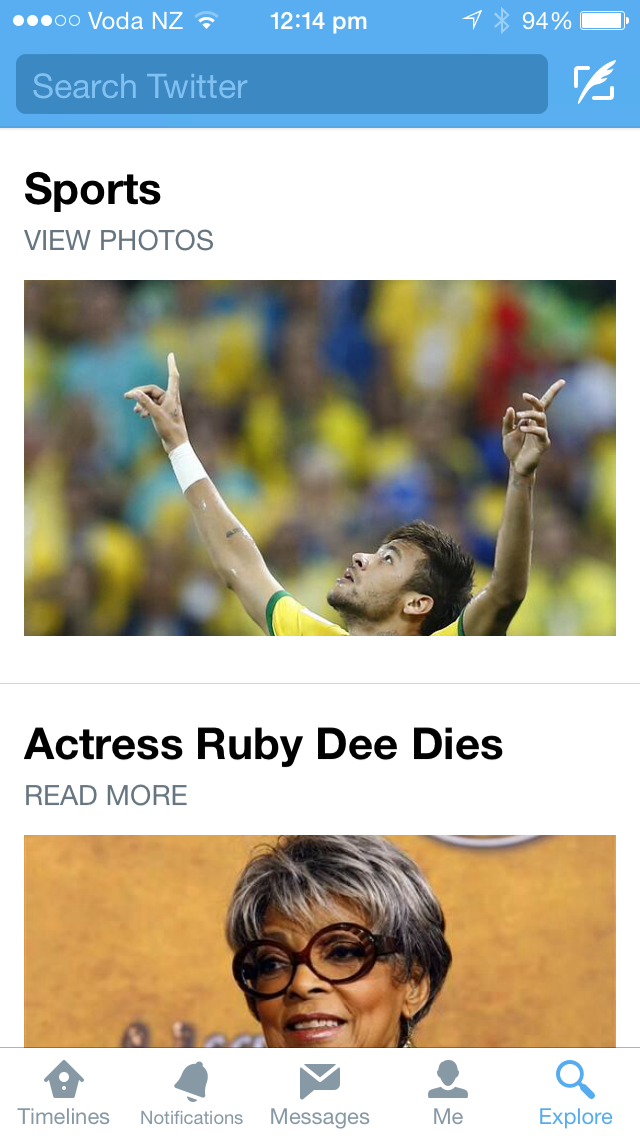 I can see why people struggle to join Twitter, now. It’s easy to go through these steps, end up following a bunch of famous people and then just be tweeting into the abyss with nobody to interact with. That’s no fun and makes it seem like a huge effort to get started.

It’s sad that instead of taking advantage of a huge amount of data, Twitter recommends famous people instead of lesser-known, active users to follow. What would a new user even do after signing up? Who should I search for?

There’s no topic based discovery for users either, so I guess just blindly searching or finding someone you like to follow and hope they retweet something interesting? This mechanism just doesn’t work.

The problem with Twitter is the mechanism for making friends is different. On Facebook, you stick to people you know and friendship requests are mutual before you start interacting. On Twitter, you interact with people you don’t know, and the friendship doesn’t have to be mutual. This is a good thing, but can be scary at first.

I don’t have the solution to this problem, but I certainly think that recommending users follow celebrities is a huge problem for Twitter and just doesn’t work. It’ll be interesting to see how the company adjusts the on boarding over the next year to try and get more people using the network.

Liked this? Sign up for my concise, clickbait free summary of tech, delivered once a week to your inbox or say hi on Twitter!

The reality of running a blog for a living

The blogosphere has been buzzing with the news that Andrew Sullivan (of The Daily Beast) has created a publishing experiment in the form of an advertisement free blog that offers subscriptions to readers and has successfully raised a... Continue →